He was a French citizen, born in the Russian Empire in the city which is now part of independent Belarus. Any country would be honoured to have Marc Chagall as his native son, but this Jewish artist was born in Vitsebsk. He lived almost for a hundred years; he never stayed long in the same place but always returned to the subject of his hometown, celebrating it in his masterpieces. "Paris, you're my second Vitsebsk!"
Marc Chagall was born on 6 July 1887, on the outskirts of Vitebsk,.– part of the Northwest Krai of the Russian Empire, which included the territory of modern Belarus, parts of Poland, Ukraine and the Baltic states and was appointed by the Government as the region of Jewish settlement. , Situated on three rivers – Vits’ba, Dzvina and Luchesa Vitsebks was an ordinary provincial town with a population close to 60,000, half of whom were of Jewish origin. Chagall left this town - very early in his life and practically never went back. Yet he carried it in his heart throughout his life. In his paintings, stained glass works and tapestries Chagall encoded the visions of his small Motherland, with its fences, goats and Jewish history. It is in Vitsebsk that Chagall saw the cornflower blue mortar and met Bella, the muse of his life.

Chagall was the eldest of nine children in a poor Jewish family. On the day Mark was born, a fire broke out in the wooden Vitsebsk. In his autobiography, he linked his wanderlust with the first hours of his life, during which he was constantly moved around by his parents to stay away from the fire.

Chagall’s father was employed by a herring merchant; his uncle was a barber, his mother sold herring in her own little shop, and his grandfather worked as a livestock butcher in Lijozna near Vitsebsk. Mark went to the local synagogue school and later to Russian high school. Recognizing his love for drawing, his mother took him to the studio of Yehuda (Yuri) Pen, a realist artist who also operated a small drawing school in Vitsebsk. The artist was surprised at the bold way Chagall used colour and offered to teach him free of charge. During the two months at the studio he took inspiration from Belarusian folk-life, and portrayed many Biblical themes reflecting his Jewish heritage. "If I were not a Jew, I wouldn't have been an artist," he later wrote.

In 1907, the 20-year-old Mark went to St. Petersburg. In the capital of the Russian Empire, he changed schools of art and took odd jobs, working as a retoucher and writing shop signs. During one of his visits home, Mark met Bella Rosenfeld, the daughter of the Vitsebsk jeweller. It was love at first sight. But in 1910 he suddenly agreed to a monthly allowance from his patron in St. Petersburg and went to study in Paris.
Chagall always stressed the importance of Paris for his development: in the famous artists’ squatter "La Ruche" (Beehive) in the Vaugirard district he met the poets Blaise Cendrars and Guillame Appolinaire, and the painters Amadeo Modigliani, Fernand Leger, Robert Delaunay, and the native of Belarus’ Smilavichy family - Chaim Soutine. In Paris he developed his unique modernist style; he learned his many lessons in the Louvre and made friends with artists, poets, and philosophers. However, his paintings showed images of the city of his childhood; he saw Vitsebsk from the window of the Paris studio. In 1914, Chagall, now an acknowledged master, opened his first personal exhibition in Berlin.

In 1915, having arrived in Vitsebsk for the wedding of his sister, Chagall stayed and married Belle, who had been waiting for him all those years. The outbreak of World War I prevented him from returning to Paris. It was in Vitsebsk that his daughter Ida was born.

Chagall welcomed the October Revolution of 1917. He became the Arts Commissioner in Vitsebsk, heading an Arts School and helping organise revolutionary festivals and demonstrations. But the local communist leadership did not like the banners with green horses, and Kazimir Malevich, the author of the Black Square, criticised Chagall’s lack of "revolutionary" vision, as his paintings were too realistic. He got tired of conflicts and in 1920 moved with his family to Moscow where he tried his hand as a theatrical designer. As it turned out, "neither Tsarist nor Soviet Russia needed" Chagall and in 1922 he returned to Berlin and then to France.

Chagall travelled extensively in Palestine, Egypt, Syria and Europe and worked hard, preparing illustrations for the French edition of Gogol’s “Dead Souls”, Jean de La Fontaine’s Fables and French language Bible. In 1931, he published a French version of his autobiography, entitled “My Life”, which he conceived back in Vitsebsk.

In July 1941, when the threat of concentration camps became evident, Chagall and his family immigrated to the United States. They arrived in New York the day after Germany invaded the Soviet Union. As he learnt about the occupation of Vitsebsk, Chagall wrote his letter crying “My Vitsebsk”: "It has long been my favourite city that I have not seen you, did not rest on your fences. I did not live with you, but there was not a single of my paintings that did not reflect your joy and sorrow.”

In 1944, as Chagall heard of  the liberation of Paris, he planned to get back to Europe. But after a few days his beloved Bella died. It took a year for him to overcome the loss and he was unable to work. Yet, Chagall regained his passion for life after falling in love with Virginia Haggard. Moreover, his daughter Ida hired a beautiful housekeeper for Chagall, who even resembled Bella. At this stage, he was 58 and Virginia was 30. Their son, born out of wedlock, was named David after one of Chagall’s brothers.

Leaving his popularity behind, Chagall followed his wanderlust and left America in 1948. The artist first went to Paris and then to the Riviera. In 1952, surviving a break up with second wife Virginia, he married once again and happily.

Chagall worked a lot, designing ballet sets and creating tapestries, mosaics and stained glass windows for churches and synagogues; his flying lovers, biblical prophets and fiddlers on the roof are in his paintings, drawings, sculptures and ceramics. Chagall designed the glass facade of the UN building in New York and painted the ceilings of the opera houses in Paris and New York. In 1973, Marc Chagall’s Biblical Message Museum opened in Nice and in 1977, the Louvre opened the first ever exhibition of works of the living artist.

Chagall travelled to Leningrad and Moscow in 1973 at the invitation of the Soviet Ministry of Culture and spoke at his exhibition at the Tretyakov Gallery. But he couldn’t make it to Vitsebsk. The problem was not his advanced age or the cold, but his fear of not finding the city that he celebrated throughout his life: Chagall knew that it was destroyed during the war.

Marc Chagall died of a heart attack on 28 March 1985. As he used to say, his life had the foretaste of a miracle. The artist deceased when going up in the elevator at his home in France’s Saint-Paul de Vence. The Jewish artist and the son of the Belarusian Vitsebsk died as he had lived and worked: floating.


By Maryna Rakhlei for the ODB

I and the Village, oil on canvas 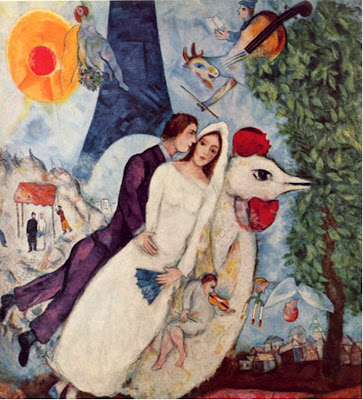