Vitsebsk: The City of Dreams

The city of artists and cathedrals, sometimes referred to as the Paris of the East, and Toledo of the North, Vitsebsk is doomed to conquer the hearts and souls of its residents and guests. No other Belarusian city has seen so many Princes, Emperors and artists passing by than Vitsebsk. This is where Napoleon proclaimed the end of the 1812 Campaign; this is where church bells were punished for the wrongdoing of the citizens; this is the City that has become the stronghold of Belarusian culture and traditions. 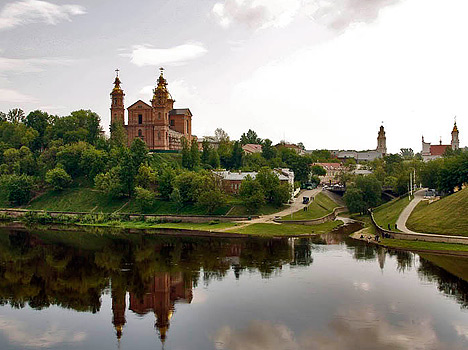 To be honest, I am desperately in love with Vitsebsk. It just has it all for me – this is where I have spent outrageously merry hours
with my colleagues and friends, this is where I enjoyed the best of jazz jamming and ballet performance, this where I have fallen in love multiple times, and ultimately this is where my husband comes from, which, as you can understand, adds a special appeal to the place.
Many hours I have spent mockingly arguing with my Vitsebsk relatives over which of the two cities, Minsk or Vitsebsk, bears the crown of Belarus' greatest city. And although undoubtedly Minsk remains the official capital, with all the accompanying privileges, nowhere can you get more fun and spirit, and history as in Vitsebsk, the artistic heart of Belarus.

But, no more idle words; let's start from the very beginning. To begin with, it is important to mention that Vitsebsk residents are very proud that their hometown is considered to be the second oldest city in Belarus.

According to the ancient manuscripts, the city of Vitsebsk was founded in the summer of 947 (or 974, nobody knows for sure) by the Great Kiev Princess Olga, on her way back from a victorious war campaign. As the story goes, Olga loved the view of the hills embracing the river
Vitsba, and so she ordered a wooden castle be built on one of the hills. Vitsebsk was the name of the castle. Consequently Princess Olga ordered the construction of two stone cathedrals - St Michaels in the Upper Castle, and the Annunciation Church in the Lower Castle. Pleased with what she had accomplished, Olga blessed the town and left for Kiev. The first official date, when Vitsebsk was mentioned in the historic manuscripts was the year 1021, when the Prince of Kiev Yaroslav the Wise was defeated by the Prince of Polatsk Brachyslau, and had to give him back the Vitsebsk Principality. Since then Vitsebsk became a stronghold of the Polatsk Principality. Later on, it became a unit of the Great Duchy of Lithuania.

Through its long history the city witnessed victories and defeats in equal measure. Many of its sights were burnt to ashes and later rebuilt only to be destroyed again. In 1410, the Vitsebsk army took part in the glorious Grunvald battle. In 1657, the city was granted the Mahdeburg Right. In 1708, during the Great Northern War, Vitsebsk was burned down by the Kazaks on the orders of Russian Tsar Peter the Great.

Only in 1775 did Vitsebsk manage to erect a new City Hall, but just to console its wounded pride – three years before the city became part of the Russian Empire, thus losing its autonomy.

In 1917 the Governor's Palace of Vitsebsk was built to accommodate yet another history defining event - the first conference of the Russian Social- Democratic Party of Workers who declared the start of the Soviet rule in the city. This is when and where the Ghost of Communism,
haunting Europe, acquired its flesh and blood. In the 1920s there was yet another revolution, this time a peaceful one was brewing behind
the walls of the Vitsebsk artists' workshops. The School of Vitsebsk Abstract Art has given the world the Black Square by Kazimir Malevich, and Mark Chagall's beautiful fantasies.

Together with Yuri Pan, these brilliant artists make for a cluster of wonderful geniuses that the Vitsebsk land has been richly blessed with.

Like Florence is associated with the name of Michelangelo, and Paris with Rodin, Vitsebsk's lifeline is forever intertwined with that of Mark Chagall. The artist, Moesha Sigell was born here in 1887 into a lower-middle-class Jewish family. He received an outstanding education at the most prominent artistic school in the city, and at the age of 20 he left his home town to conquer the world with his breathtaking
paintings. Although most of his life was spent abroad, Chagall never really abandoned Vitsebsk, recreating and fantasising about it in each and every one of his paintings. The museum of Mark Chagall on Pakrowskaya Street (located in the house where Chagall spent
his early years), as well as Chagall's Art Center are perhaps the biggest attractions for genuine art lovers visiting Vitsebsk (Here is the link to the museum: http://www.chagall.vitebsk.by).

WWII did not spare Vitsebsk from any of the grievances the Belarusians had to endure. During the four years of Nazi occupation 20 thousand Jews were murdered in the Vitsebsk Ghetto, while thousands of people died fighting with the oppressors.

But gradually the city's wounds healed and it became what it is now – vivacious and bursting with life, arts and romance.

I know that Vitsebsk residents do not share my sentiments but I really think that those brilliant minds who invented Slaviansky Bazar - the International Arts Festival – deserve a Nobel Prize. Since 1992, once a year, in July, Vitsebsk will explode into a hilarious never ending
carnival, that would last for over two weeks and leave the city exhausted and barely holding on (and this is exactly why the majority of Vitsebsk residents abhor the very idea of the approaching festival, fleeing  from the city to the neighboring dachas and villages). And Still,
Slaviansky Bazar is our Rio, it is our Mardi Gras – there is nothing like it in madness, cheerfulness and popularity. You name a star
(mostly Eastern European), and you'll definitely find them wasted in a nearby bar surrounded by the not much more sober media sharks.
Jazz, pop, classic, traditional crafts - it's all mixed up and blended into a never ending exultation. I've been there, I've done that. And
honestly I loved every second.

Slaviansky Bazar, though, is not the only festival that takes place in the cultural capital of Belarus. Jazz festivals, dance festivals, theatre
festivals and more topical festive events keep the fire burning here all year round.

There's never enough to say about Vitsebsk. You can never see enough of its beautiful streets, elegant cathedrals and blooming
parks and squares. This is the City where history is still alive, and the spirits of the city's patrons welcome and protect you on your
journey into one of the centres of Belarusian culture.