Belarus May Seem a far away Country, but We Have to Confront Europe's Mugabe

Happy Christmas? Not for Belarus. Grandfather Frost, the Russosphere version of Santa Claus, came early to Minsk this year, and the presents he brought were election fraud, police beatings, mass arrests, Soviet-style lies and, for the European Union, a special Christmas card saying "screw you". 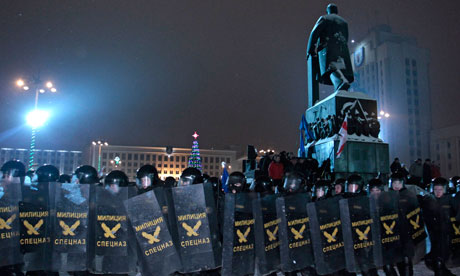 Natalia Kaliada of the Belarus Free Theatre was among those rounded up last Sunday, after she and others protested against president Alexander Lukashenka's shameless stealing of yet another presidential election. She told Index on Censorship that she was held for 14 hours and not allowed water, food or sleep. Detainees of both sexes were kept in freezing prison corridors, abused by guards ("You are animals ... Our dream is to kill you"), and obliged to defecate in front of each other.

One of the opposition presidential candidates, Uladzimir Nyaklyaeu, was beaten senseless even before the protest demo began. Later he was hauled out of a hospital bed to be thrown into prison. More than 600 people, including leading figures in the independent media and the arts, have been detained by the KGB (as it's still called in Belarus). In some cases their families don't know where they are being held. Some face prosecution for "instigating mass disorder", an offence that carries a maximum prison sentence of 15 years. A young aide to Neklyaev appeared on state television, looking worn and fearful, to make a partial recantation. President Lukashenka told a press conference there would be no more "senseless democracy".

There is a word for all this. That word is terror. Not full-dress, 1930s-style Stalinist terror, to be sure, but still something qualitatively different – let me anticipate the objections of a few Guardian readers – from police violence in a west European democracy. Unless, that is, you believe that British police batons in Parliament Square were being wielded to defend a criminal authoritarian regime.

There is also a puzzle here, though not an insoluble one. In the short term, Lukashenko did not need to crack down so brutally to stay in power – as this Robert Mugabe of eastern Europe has done since 1994. Having opened up state television to opposition candidates, and made a show of meeting the EU's demands for a free and fair election, he could have rigged the vote just enough to get back in. He could have let the weak and divided opposition go on protesting for a few days in a freezing Minsk, and then quietly cleared away the remaining protesters from Independence Square while western leaders were celebrating their Christmas.

Why be so brutal? Why rub their faces in it? One answer, which invariably pops up in such circumstances, is divisions within the ruling apparatus. Hardliners got the upper hand. There may be some truth in this; but another, simpler explanation was given to me by Andrey Dynko, editor of the leading Belarussian weekly, Nasha Niva. Lukashenko, reverting to what Dynko calls "Russian autocratic tradition", simply wanted to get the levels of fear back up to a healthy (for the autocrat) level. National fear standards had fallen alarmingly over the last few years of relative liberalisation and opening to the west. Better teach his people a lesson again. National fear must be kept higher than national debt.

What is clear is that repression had been planned irrespective of the scale and course of the planned opposition demonstration. Neklyaev was beaten up before it. I have been in touch with independent observers who were present at the demo. They testify that men who had all the hallmarks of provocateurs smashed windows in government buildings, giving a pretext for the pre-positioned special forces to move in. One should always beware of conspiracy theories, but sometimes there are conspiracies.

Yet Europe's Mugabe only dared to act in this way because, 10 days before the election, he unexpectedly secured a deal with Russia. This once again gives him subsidised oil, which he can sell on at a profit. For his part, he agreed the terms of a "single economic space" with Russia and Kazakhstan.

Before that, the boot had been on the other foot. Russia seemed to have had enough of Lukashenko: a Russian TV channel owned by Gazprom even aired a four-part series attacking him as a corrupt godfather. Meanwhile, the Polish and German foreign ministers had flown to Minsk with a bold offer. If Lukashenko held a reasonably fair election, his country could be set on a glide path back to European civilisation – and the EU would aid him down that path with a package of grants and loans worth more than €3bn.

This offer was always a gamble, but one worth taking in the circumstances prevailing at the time. Now, however, with Russia apparently back on side, and having made a cold neo-Leninist assessment of the foundations of his own power, Lukashenka has decided to beat his own people over the head with a stick – and tell the EU exactly where it can put its carrot.

Belarus is a far-away country of which most west Europeans know little. All the more reason to open our eyes to what is happening there. This is a bad end to a bad year for Europe. The still unresolved crisis of the eurozone is, of course, a much larger threat to the whole Whig narrative of recent European history, seen as a story of progress towards more freedom, prosperity and integration. But if the EU can no longer exert its magnetic powers of attraction over a small impoverished country on its very doorstep, that is a blow too. In recent columns I have lamented India's failure to influence things for the better in Burma. In Belarus we have our own European Burma.

Immediately, we must do everything in our power to have those political prisoners released, so that they can spend the festive season with their families and a more genial version of Grandfather Frost. Then, early next year, the European Union needs to take a long, cool look at its own face, as it appears in the Belarussian mirror. It may not be a pretty sight.
The Guardian