Changes in Belarus: The Task for the Opposition, not Foreign Powers 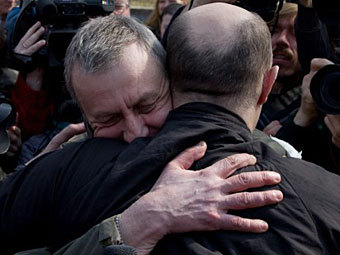 First, Lukashenka can very soon change his mind, take new prisoners and start the liberalisation game anew. Second, the release of opposition activists taken hostage by the regime may have humanitarian or personal significance but no political impact – as long as they do not undertake real work with people inside Belarus. The fundamental problem is that only three actors play this liberalisation game - the Belarusian regime, Russia and the EU. The Belarusian opposition's role is that of a ball with which they are playing.

The reasons for the latest friendly gestures towards West by top officials are the same as before. Worsening of Belarusian relations with EU has narrowed options of Belarusian ruler to a pitiful role of Moscow's vassal. After Putin became the Russian president, he declared his intent to intensify building of Eurasian Union which can be dangerous for Lukashenka's power and survival.

No wonder, the Belarusian leader looked westwards again to return to his older model of multi-vector foreign policy. He is gradually accepting some demands of the EU as in 2008, when he also released political prisoners and began dialogue with the EU. The pressure on the opposition diminished – yet it did not result in strengthening opposition inside the country. Then came the 2010 elections, confrontation and suppression of the opposition within Belarus. The same happened in 2004 and 2006.

The vicious cycle will repeat again as the interests of stakeholders and power balance on the part of the EU, Russia and Belarusian regime remain the same. The situation can change only when the opposition inside Belarus emerge as an organised and self-conscious force. The opposition should become a visible player not only in Brussels and Washington.

True, Lukashenka's regime blocks many movement of his opponents but there are absolutely no grounds to compare it to Stalin or even Third World dictatorships. Working with the population in Belarus is possible.

Currently, many in the opposition are preoccupied with retaining their financial support without being able to produce any proof of their own efficiency and popularity inside the country.

The year 2011 demonstrated that the opposition could not organise any serious political campaigns despite widespread anger at government policy displayed by Belarusians because of economic and social problems. The silent protest actions remained spontaneous mob actions without content, and “People's Assemblies” simply failed to attract any considerable numbers of people.

Apparently little has changed in this regard in recent months. The websites of oppositional parties - their main representation platforms given the current situation with media - demonstrate just that. The websites of three major oppositional parties - Belarusian People's Front Party, United Civic Party and Social Democratic Party - resemble internet news sites rather than outlets of political organisations.

Parties usually reprint various news already available elsewhere on Internet and may occasionally publish their own analytical pieces or various statements. Yet they give little indication of actual activities inside Belarus and work with people. Of course, topics such as prospects of the Eastern Partnership, the role of the Belarusian People's Republic' government in exile and the Belarusian origins of Scarlett Johansson are very interesting but they have little to do with the situation in Belarus or the parties' own activities.

The situation looks better with political movements. Both "Tell the Truth" of Uladzimir Nyaklyaeu and "For Freedom" of Alaksandr Milinkevich look more dynamic. Their sites demonstrate concrete examples of working with the Belarusians  inside the country. For example, "For Freedom" is organising public lectures and "Tell the Truth" is conducting a campaign  on the newly proposed Chinese Industrial Park which seriously worries local residents. But their own reported activities still resemble the old parties.

What this means is that the problem of little work with the people have plagued all major oppositional political structures.

Anthropological insights help to understand activities of Belarusian opposition and society. Some South Pacific islanders, after seeing Western vessels with valuable items arriving to their lands, developed the so called "cargo cult". That was a form of religious belief that salvation which shall come from foreign land on a ship or aircraft. That is a pattern to describe activities of Belarusian opposition in recent times.

Activity of most oppositional politicians concentrate on foreign governments and stakeholders. It is assumed that the opposition anyway cannot do anything within the country. That means that they need not undertake any efforts to improve their performance inside Belarus. Instead, the oppositional politicians put pressure on Lukashenka from abroad with using the reach of the EU. But such behaviour is more likely to produce only their final marginalisation inside the country rather that any real, albeit small, change.

Need to Develop An Alternative

Tendencies to focus primarily on foreign advocacy lowered efficiency of opposition and their chances to achieve changes within the country. The gap between the opposition and reality in Belarus may end badly for all. Just one example. Many radical activists call for Western sanctions but not for funding the deeply needed projects – like new media projects or the improvement of the existing ones.  Mass media in Belarus should become much more vigorous, provide society with independent information about what is going on in the country, and serve as a discussion platform.

For example, the only Belarusian-language Belsat TV channel is broadcasting original content under extreme pressure put by Belarusian authorities on its journalists in the country. It has much better chances to help changing the situation in Belarus than dozens of websites. Nevertheless, Belsat is chronically underfunded even now.

And there is no such thing as too much funding for media, education, cultural and academic exchange projects. Of course, such a policy is more expensive than sanctions. Sanctions are an easy solution particularly when they are imposed against a relatively small country. They can nicely demonstrate how the EU can punish a dictator.  But  breaking the vicious circle requires not just sanctions but real work inside the country.

The opposition will have a hard time getting more money for this kind of projects. Finding money inside Belarus is virtually impossible and for foreign donors supporting real projects directed at Belarusian people could be more expensive and risky than supporting various exile opposition groups or yet another website.

But it is important to understand that only working with Belarusians rather than Brussels insiders can seriously increase respect for the Belarusian opposition, which should appear as a responsible and trustworthy political actors inside the country. Once the public opinion starts to change in the right direction, the question of changing the situation in Belarus will become a question of time.

Otherwise, the cycles of taking and releasing political hostages will be repeated again and again.