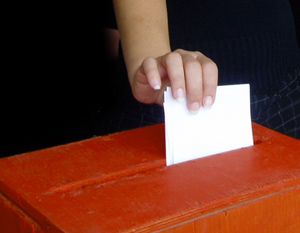 01.04.2010
The initiative “Human Rights Defenders for Free Elections” is criticising the high number of opposition candidates who have been denied registration. Whilst of the total 25,475 candidates who put themselves forward only 318 (1.2%) were rejected, of those 294 candidates nominated via the party lists of the registered opposition parties, 54 (18.3%) had their registration refused. The precise number of opposition members who will participate in the upcoming election campaign is not yet final, because, according to current estimates, up to 300 opposition politicians have been nominated via the collection of signatures, and because many of the opposition candidates who were denied registration have already submitted appeals. It is striking how few people are prepared to stand for the local elections: Only 25,035 people will be competing for the 21,303 council seats.

Domestic election observers criticise discrimination against the opposition
The registration of candidates for the regional and local elections in Belarus has been completed. Although the initiative “Human Rights Defenders for Free Elections” evaluates this stage of the election campaign on the whole as being “more democratic and more transparent than during the 2007 local elections”, it nevertheless also draws attention to the severe pressure which the state apparatus has put on numerous members of the opposition and activists, who were either unable to register or forced to pull out of the election campaign.

During the registration, which took place between the 15th and 25th of March, a total of 318 candidacies were refused by the regional election commissions. That represents 1.2% of the 24,475 candidates who attempted to stand. The opposition parties were however far more severely affected by these refusals: Of the 294 candidates from the registered parties belonging to the opposition bloc, 54 (18.3%) could not be registered.  Similar results were seen for the unregistered opposition parties. For example, the Belarusian Christian Democratic Party put forward 173 candidates by collecting signatures, of whom 91 (52.6%) were rejected. A further 122 people withdrew their candidacies themselves.

Even before the start of the registration process, dozens of members of the opposition had withdrawn their candidacies because of acts of repression from the secret service and from their superiors at work. “Today, the only people participating in the election are those who either have nothing to lose or who want to gain the experience of an election campaign”, comments Anatol Lyabedzka, chairman of the United Civil Party, on the website of the United Democratic Forces of Belarus.

Over 17,500 single-candidate electoral districts expected
According to the domestic election observers’ figures, only 25,035 people will be standing for the 21,303 council seats, which means that a genuine election battle between at least two candidates will only be possible in a maximum of 3,732 electoral districts. In all the other electoral districts, primarily in the rural areas of the country, there will only be a single candidate standing for election. “The regime has put pressure on the opposition in the regions”, says Anna Kanius, a registered candidate of the Belarusian Social Democratic Party ‘Gramada’, in Berastse (Brest). “Activists who criticise the regime, who come from a small town and who are threatened by the loss of their jobs, can hardly count on any support from strong regional party structures.  It is particularly difficult for them to last throughout the course of the election campaign”, comments Kanius, referring to the relative lack of involvement of representatives of the opposition in the local elections. “It is almost impossible for them to find a new job where they live” the politician explains and adds: “The fact that almost none of our activists will be able to control the voting and vote-counting processes as members of the precinct election commissions makes a fair election campaign in the provinces practically impossible.”


Denial of registration often unlawful
According to information of the initiative “Human Rights Defenders for Free Elections”, opposition candidates were often unlawfully denied registration. The new electoral code does prescribe the ability to view the documentation of the registration process and also allows for a court appeal. As a rule however, this is not put into practice in many parts of the country. In this way, the officially registered election observers in Mazyr and Grodna were prevented from checking the allegedly falsified signature lists of the refused candidates. In Berastse, a young candidate from the Belarusian Social Democratic Party ‘Gramada’ was denied registration on the grounds that he is currently studying in Gdansk in Poland. He does however have his main place of residence, and therefore his active right to vote, at his home in Berastse.

Similar cases have been reported all across the country. The opposition has been hit particularly hard in the Baranavichy region in western Belarus – there the regional election commission refused the registration of nine out of ten experienced candidates who are critical of the regime because of small inaccuracies in their signature lists. In this case, the domestic election observers could be certain of the fact that the allegedly falsified signatures had been falsified by the commission members themselves.

Most of the unregistered opposition candidates have already submitted appeals against the decisions to the responsible election commissions. For this reason, the final number of opposition members who will be participating in the upcoming election campaign is not yet known.

For most candidates the election campaign has already begun. The events in Belarus are drawing more and more attention from the international organisations, the OSCE and the EU.
_____________

This newsletter is produced by European Exchange (www.european-exchange.org) in cooperation with the Human Rights Center ‘Viasna’ (www.spring96.org/en) and the Belarusian Helsinki Committee (www.belhelcom.org) in Minsk, and is supported by the Embassy of the Kingdom of the Netherlands in Warsaw and the German Marshall Fund of the United States in Berlin.

The previous editions of the newsletter can be found on the European Exchange website: