Economic performance during first two months of 2014 has been rather disappointing. First, almost all industries reduced their output which led to a decline in GDP by 1.6% year-on-year in January-February.

Second, Belarus has faced new challenges on foreign markets, which are a consequence of capital outflows and weakening growth in Russia.

These economic shocks will deteriorate short-term prospects for Belarus, although the scope and scale of the negative impact is still not clear. Nevertheless, the government will have to react to the new environment it finds itself in, as the volume of accumulated imbalances is too high to be ignored.

Belstat reports that in January-February GDP fell by 1.6% year-on-year. The drop in output occurred in all major industries of the economy: manufacturing, agriculture, construction. The trade sector has become the only significant exception to this trend: it witnessed 7.8% year-on-year growth thanks, in large part, to retail trade (the value added of wholesale trade was roughly constant).

A number of controversial trends were seen developing in the Belarusian economy. For instance, it can be argued that the economic downturn has become more systematic, as some large sectors (e.g. construction, agriculture) have also become members of the long-term recession club in manufacturing.

At the same time a majority of branches in manufacturing (e.g.food, chemicals, woodworking) have begun to exhibit the signs of recovery. These manufacturers have already hit rock bottom in terms of their output and are now reemerging.

Nevertheless, the latter trend does not capture a number of the largest branches of manufacturing in Belarus including the production of transportation vehicles, electric equipment, and metallurgy. Overall, from a production point-of-view, the economic environment appears to be unstable and exudes a very low level of confidence.

When looking at demand, the only component that seems to be doing well is households consumption. It continues to provide a regular, positive contribution to GDP. For example, consider the fact that retail turnover, which is closely tied to households consumption, grew by 12.9% year-on-year In January-February.

However, this tendency seems to be more an issue of inertia than progress and can be attributed to a substantial hike in wages the previous year. Nowadays, the growth of wages has all but come to an end (see Figure 1), which is likely to diminish consumption in near future. 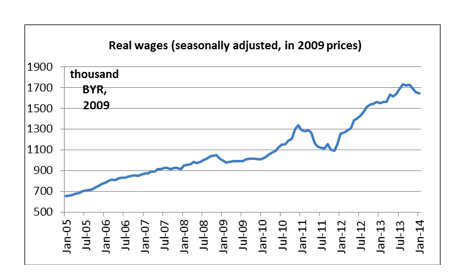 Capital investments, on the one hand, exhibited a huge drop of roughly 20% year-on-year in January-February. On the other hand, it does not necessarily imply a further recession in investment demand, as poor performance in January-February reflected high interest rates, though the authorities intend to bolster lower rates soon, and some statistical effects.

As for foreign demand, preliminary data appears to provide an argument for it being in a state of stagnation. Hence, demand tends to be rather sluggish and there are not any options apparent to provide its rapid improvement.

Macroeconomic policy during the beginning of 2014 was, to put it crudely, roughly neutral. For its part, the government intended to stimulate demand given its poor state at present. With this in mind, the authorities proceeded to somehow reduce policy interest rates and allowed for a minimal level of depreciation of the national currency.

Still, the government is concerned with the dangers of future financial turmoil, especially given its huge external imbalances and the fragility of the state's current financial equilibrium. The National Bank has subsequently decided to restrict banking activity, while the government abandoned its policy of wage stimulation.

Overall, stagnation with a high degree of uncertainty would be a good way to characterise the current domestic macro-economic situation. Weaknesses on many different fronts created this situation, and these weaknesses interact with each other, which influences the overall state of the economy.

First, a lack of natural mechanisms for growth has become a structural constraint that reflects the absence of incentives and sources for productivity growth. Second, unfavourable and volatile expectations propagate uncertainty and result in poor demand. Third, economic policy has fallen into a trap: the low effectiveness of traditional tools, given unfavourable expectations, results in uncertainty about the priorities of any potential policy.

In the beginning of 2014, capital outflow from emerging markets all over the world strengthened. In the case of Russia, the relative volume of outflow exceeded the average value for emerging markets (in relative terms), as weaknesses in Belarus' growth potential became more evident.

Furthermore, Russian involvement in the political tensions in Ukraine might have led more investors to withdraw from being exposed to Russian markets.

In this situation Russia has faced a considerable depreciation of its currency against all other major world currencies, including the US dollar against which it depreciated 10.8% in January-February. Moreover, other large CIS countries (Ukraine and Kazakhstan) also decided to undergo a round of currency devaluation as well.

As a result, the competitive environment on the markets of these countries has changed considerably. Alongside the capacity of these markets were shrinking due to their deteriorating growth prospects.

A new situation on foreign markets has created a new challenge for Belarus. Trying to restrain inflation and devaluation expectations, the National Bank preferred to follow a course of gradual depreciation in respect to US dollar, and actually ignored the devaluation happening throughout the CIS. This policy, however, led to a considerable appreciation of the national currency (see Table 1).

Table 1. The Evolution of Exchange Rate of Belarusian Rouble in January-February, %

Table 1. The Evolution of Exchange Rate of Belarusian Rouble in January-February, %

Thus, Belarus has faced a severe external shock, which is likely to hurt its exports considerably (and promote imports from other CIS countries). The already huge external imbalance that currently exists might increase even further, although it remains to be seen precisely what will be the effect of this phenomenon.

The economy has not yet fully felt the effects, which is rather typical, since there is usually a lag between the shock itself and its impact on the economy. For instance, the majority of foreign trade transactions that were finalised in January and February were negotiated before the shock set in. This means that the economy has yet to see the effects of the economic shock waves that hit the Belurasian economy.

Given the bulk of the already accumulated distortions, a new shock might trigger a more radical policy response by the authorities in near future. The government is doing its best to avoid intensive implementing either a policy of austerity and/or depreciation.

However, modest usage of these instruments cannot guarantee the successful neutralisation of new economic shocks. Most likely the government will try to provide rapid access to a new chunk of external financing, either due to political agreements and/or due to privatisation deals. Otherwise, automatic macro-economic adjustments in exchange rate and prices might pose a thr