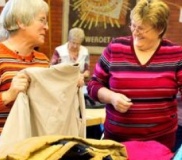 The argument for loosening the visa regime for Belarusian citizen is that people to people contacts must improve. At a time when the official diplomatic relations are at an all-time low, it seems that the exchange between ordinary people offers a glimpse of hope. It might prevent the Belarusian citizen from total isolation. However, looking at the German-Belarusian informal relations, it gets clear that it may not work. Here is why.

The EU and many support programmes aim at bringing together civil society actors. In their opinion, young people, politically interested actors and activist of non-governmental organisations should meet. Belarusians would consequently understand how democracy works and the Westerners would see themselves that Belarus is a country worth visiting. But this is a somehow naïve vision of things.

If you look at those who are actually travelling to and fro Belarus and Germany, you can dress the following list:

* Women tourists: men who think “Belarus” is the name of a high gloss catalogue with beautiful women. Choose any you like. A German private television network is now broadcasting a series showing a middle-aged man who comes to Minsk to meet girls he met through an agency in the search of the love of his life. TV shows like this strengthen the image of Belarus as a country where beautiful women are waiting for allegedly rich men coming to marry them and offer a better life in Germany.

* Businessmen. They take direct flights from Frankfurt or Berlin and stay in top class hotels. Neither has any of them as ever been to the sleeping districts where Belarusians actually live nor are they sincerely interested in going there or experiencing the “real” Belarus.

* Members of partnership and aid committees. Those people are working in German- Belarusian friendship associations. They bring clothes and food to Belarus. If you tell them that people in Minsk are neither starving nor walking around in rags, they will be very astonished to hear that. In their opinion, every child living in Belarus is a “child of Chernobyl”. It is very common to read in German newspapers that “20 children have arrived to Germany to recover from the Chernobyl catastrophe”.

Belarusians who want to go to Germany have to show an official invitation letter. As a consequence, the groups of people travelling West are the following:

* Chernobyl children. Those children invited by the friendship associations.

* Students with a grant from one of the many organisations offering scholarships to Belarusian students.

* Women who are going to get married to Germans.

* Men who want to buy a car. This was an especially big group last year before the customs tariff for the import of cars rose. There were many thousands of men going to Germany in order to by second-hand cars.

No Contacts at Grassroots Level

The problem is that those groups of people have totally different expectations when they meet. Consequently, there are no eye-to-eye meetings between the German and the Belarusian civil society.

The meetings of friendship associations and partnership committees are based on the assumption that Belarus is an underdeveloped country that needs material support. People collect old clothes and tinned food in Germany in order to send it to Belarusian towns. Most of them have not been to Belarus for several years, otherwise they would know by now that nowadays it is difficult to distinguish a German teenager from a Belarusian one by their appearance. Smartphones, flat screens and modern public transport is a part of the everyday life in the Belarusian cities.

The partnership committee members think they are doing the Belarusians a favour by sending them their old clothes. However, none of them is looking at the meetings with people from Belarus the other way round: That Belarus is a great country and Belarusians are on a par with them. Of course the living standards here is not as high as it is in Germany, but there are still things that Germans can learn from their Belarusian friends.

On the other hand, Belarusians often look down at their German acquaintances. They go to Germany with a feeling of “Germany is a great country, only that there are too many Germans living there”. They think the country is well-organised and approve of the efficiency of their German friends. Then, however, they deplore that things are different than in Belarus: people are coldhearted and they generally lack solidarity with each other.

How to Stop Supporting Stereotypes

If those partnership committees concentrated on working against stereotypes on both sides, this would be a big step forward in German- Belarusian relations. As it is now, the old scheme of donor and recipient is maintained. No evolution of the work of those committees has happened since the Chernobyl disaster. Only if meetings take place at an equal level, there will benefit Belarus' transformation.

It is true that some German and Belarusian NGOs do try to cooperate. Those NGOs that are really doing efficient work in Belarus are not registered here. Unfortunately, German donors shy away from cooperating with non-registered NGOs and try to work with those few that are officially accepted by the Belarusian government. If the international and German donors changed their opinion on this point and took the (manageable) risk to cooperate with an organisation regardless of its formal status, money and energy could finally go to those projects where people meet as equals.

Belarus is a great country. It is time to stop seeing it as an exporter of beautiful but will-less women who are happy to get donations from Germany. Belarusian children should go to Germany and take part in exchanges without being labelled "children of Chernobyl". They are not pale impoverished children but smart young people who know mathematics ten times better than the German children they meet.

And: Germany is a great country, too. Germans are not as bad as their reputation.