Minsk is Looking for New Friends, To Replace the Ones It Lost 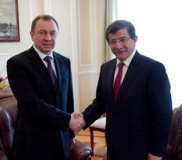 Last Friday, Turkish Foreign Minister Ahmet Davutoğlu visited Belarus. According to Belarusian officials and media the minister came just to sign visa abolition and readmission agreements. The Turkish Foreign Ministry added that ministers had, "exchanged views on regional issues mainly Syria, Iraq, and Afghanistan.” This addition appears to be especially intriguing since never before has such a high-level Turkish official visited independent Belarus.

Davutoğlu is seen as the architect of new Turkish foreign policy who is pursuing a neo-Ottoman style, and the man backing the Syrian rebels, flew to Belarus for something more than signing two pieces of paper. They could have been signed by a lower-level official. He came to Belarus because Minsk is rumoured to be cooperating with the Syrian authorities while Turkey supports the Syrian rebels.

The United States has even introduced sanctions against some Belarusian firms for their alleged arms deals with Bashar Assad. Davutoğlu's visit could mean that Lukashenka does after all has some weight in arena of international politics and Ankara is seeking Belarusian assistance in toppling the Syrian government.

Apparently, Minsk could benefit from more Turkish investments if it gives up Syria. Furthermore, Davutoglu has stated that Turkey, “was ready to contribute to the integration of Belarus into the international community.” It means providing possible help in reviving contacts with the EU and maybe some other Western partners, like NATO and the United States. No doubt, Ankara could do that, but the question is -- would it really deliver on these promises? Would Turkey help Belarus after it solves its own problems and Assad has been toppled?

The Belarusian leadership had to consider similar dilemmas a few years ago. The rich Arab regimes of the Persian Gulf did their best to convince Minsk of necessity of limiting its friendship with Iran and, in return, receive compensation for its loyalty its new Arab friends.

They succeeded for a while. Belarus dramatically reduced its contact with Tehran since 2010. Whereas in the 2000s, almost every month some Iranian delegation – frequently at the ministerial level – came to Belarus, since 2010 such visits have become rare, despite all attempts by the Iranians to continue cooperating with Minsk. As a result Iranian investment projects began to stumble and an Iranian car production project was suddenly declared senseless.

At the same time Lukashenka publicly celebrated his successes in establishing links with pro-Western conservative Arab monarchs, touting projects like “Qatar Island” in Europe – to be built in the south-western Brest province. But promises of his new friends from Qatar, UAE and Oman never materialised. Minsk felt deceived by these empty promises. Last year, it simply cancelled a huge investment deal with Oman which started at the highest level and included giving a part of the Belarusian capital to Omanian developers.

Close Encounters of the Third World

The relations with developing countries has remained generally unstable for two decades. Belarusian diplomats have a difficult task in establishing relations with new countries. In some traditional directions the existing circumstances have prevented Minsk from developing closer relations. The Arab Spring and Iranian nuclear crisis in particular have contributed to the disruption of relations with North Africa, Syria and Iran.

Lukashenka recently lamented, “Of course, it is a pity that we lost Libya, we lost Syria and some other countries.”

An analysis of foreign policy in recent years demonstrates the slowdown in contacts with developing nations and even the collapse with some important players. Lukashenka recently lamented, “Of course, it is a pity that we lost Libya, we lost Syria and some other countries.”

Facing these massive problems Minsk last January even held consultations on the issue with Russia. In late March, the Belarusian leader personally hastened to rescue the Foreign Ministry and visited Indonesia, Singapore and the United Arab Emirates.

The problems in relations with the Third World go beyond a political dimension. The trade with developing nations remains extremely volatile and trade volumes with some countries drop and rise every year by margins in the hundreds of percent.

Another problem is diversification. Andrey Yeliseeu of the Belarusian Institute for Strategic Studies in an upcoming study emphasised that in 2012, among the major economic partners of Belarus in the developing world only five – China, Iran, Turkey, Venezuela and Cuba – had diversified their imports from Belarus. To the majority of other developing nations, Minsk sold one or two articles (mainly, potash and nitrogen fertilisers), although sometimes for billions of dollars. Clearly this signals that the most urgent problem surrounding its export markets remain unresolved.

The Belarusian Ruler Waiting for the Rise of China

Historically, Belarus has been a land between Russia and Europe. Each government has wanted to reduce this dependency however possible, including looking for partners outside of Europe and Russia.

The Belarusian regime's biggest hopes lie in a new global leadership lead by China. Lukashenka and his retinue have pragmatically calculated that the new readjustment of powers in the world may happen in the near future. Moreover, they see feel their beliefs have been confirmed by recent international developments – the global economic crisis, EU internal difficulties, and the rise of BRICS countries.

The Belarusian leadership has proclaimed relations with developing nations one of its foreign policy priorities. Some in the opposition insist that since late 1990s cooperation with the Third World has been a major source of money and other benefits for the Belarusian regime. Uncorroborated claims to that effect are common place in oppositional rhetoric.

In reality though, Belarus' position in the developing world remains precarious. The share of developing nations in foreign trade is constantly hovering around 10-12% for Belarus. The lucrative arms deals were to be found back in the late 1990s – early 2000s, but have since more or less disappeared. Minsk itself now prefers to stay away from any potential hotspots or doing dealings with radical movements and regimes, yet still fails to find enough new markets.

Thus, in late 2011, the US was able to block Peru's ratification of a military technical cooperation agreement with Belarus. Minsk planned to modernise the Peruvian air force and, after long negotiations, managed to conclude an agreement with Peru. However, the Peruvian liberal opposition resisted the deal with Beltekhexport. Peru21, a media outlet, accused the Peruvian government of cooperating with a Belarusian company that had been sanctioned by the EU and US and continued insinuating arms deals with "Pakistani and Syrian terrorists".

Relations with developing nations have given the Belarusian leadership some leverage in balancing relations between the West and Russia. But it would be wrong to describe these relations as an adventurous rapprochement to anti-Western regimes.

The Belarusian ruler can be accused of many things, but ideological rigidity is not one of them.

Lukashenka is going after money and is willing to reshuffle his own foreign policy if he can see an opportunity to benefit from it. He effectively renounced Qaddhafi, tried to replace Iranians with Arabs, and agreed to speak with the Turkish Foreign Minister about Syria. The Belarusian ruler can be accused of many things, but ideological rigidity is not one of them.

The essentially revisionist world view of the ruling elite in post-Soviet Belarus includes some elements which can be considered anti-Western. After all, it has been shaped by the USSR's collapse and the triumph of the Western bloc. But it remains anti-Western only in so far as they can find no place for themselves in the Western bloc. That is why for the time being they prefer to  cooperate with anti-Western governments.

The Belarusian regime might be well aware of problems with the West and Russia, yet it remains hopeful. Lukashenka believes that changes in the landscape of global politics caused by some developing nations are imminent. He has repeatedly urged Belarusian officials and businessmen "to go to the places where nobody knows us."