Money and Brotherhood: What Belarus Means to Moscow? 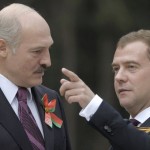 Every time facing confrontation with Moscow, Belarusian president speaks about immaterial and spiritual – common Slav roots, history and kinship of Belarusians and Russians. Emotions and sentiments can matter a lot in international politics and are an effective tool in national foreign policy of some countries. Reiterating his declarations on Belarusians’ and Russians’ unity, Lukashenka is undoubtedly targeting Russian sentimental bonds to his country, not his Belarusian compatriots.

Russians are mostly longing for their imperial and Soviet history to be appreciated and positively articulated abroad. Lukashenka perfectly realized it a very long time ago. He understood that huge potential of Russian frustration and anger at loosing former imperial greatness had harbored immense opportunities for political projects in Russia. One did not need to be even a Russian politician to conquer neighboring country’s hearts and minds by playing old imperial motives!

After coming to power in mid-1990s, Lukashenka shrewdly posed himself as a warrior for restoring Soviet Union and his version of pan-Slavism. It fared quite well for a while and he got very popular in Russia whose residents ever more were seeing him as a fine alternative to hard-drinking Boris Yeltsin in 1990s. Belarusian president was firmly on his way into Kremlin. But then Colonel Putin unexpectedly put an end to it at millenium turn. Lukashenka could not compete with dynamic new Russian leader.

Belarusian regime’s Russian policy contracted to more humble limits. It began to implement a new, however, pretty familiar paradigm – while playing on emotional, spiritual and mythological bonds to Belarus in Russian mentality, Belarus should have become the very best Russia’s ally to be cared of and defended at any cost by Moscow support and money. Actually, one can guess that Lukashenka wanted to be for Russia what Israel is for United States, i.e. a strategic ally which significance is not limited to solely economic or military issues.

In this context many of his words do not appear so irrational. Thus, these days, after new gas complications with Kremlin, he said:

It is unacceptable to treat Belarus this way [as Russian leadership now] It doesn’t matter that we had difference in cost [for gas]. After all, for Russia itself there is a big difference between Belarus and other nations… Belarus for Russia has quite another value We will survive. However, I believe, it is unacceptable to treat so an allied people [Belarusians] with which you [Russians] together were dying in the trenches [during the World War II]. And these are no emotional speeches, though emotions for us, Slavs are also important.

In 2009, Lukashenka himself indirectly admitted using ‘Israel model’ in his Russian policy an interview an extreme right-wing Russian newspaper “Zavtra”:

Americans are funding Israel and give it as many credits as they [Israelis] can spend and then cancel their [Israelis'] debts. They [Americans] are completely financing Israel’s defence. Let’s not literally but conceptually use their model. After all, we are more for you than Israel for America. We are part of your defense, part of your security.

Of course, Russians feel themselves more emotionally attached to Belarusians than to most other post-Soviet nations. Yet, Minsk despite all efforts did not manage to implement the ‘Israel model’. Perhaps, since it could not organize effective pro-Belarus lobby in Moscow. Or the reason for this failure can be found in another more tragic case of imperial sentiments for lost Slavic lands that led to a political catastrophe. Probably, Belarus seems to Russian politicians more like Kosovo for Serbs. They want it merely back.

They are not ready to tolerate its distinctiveness and freedom, nothing to say about supporting its independence and prosperity. On the contrary, America consider Israel a partner and ally. Russian political elites view Belarus as some remnant of their great empire and treat it as they treat.
Belarus Digest