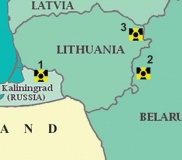 In the coming years virtually all southern Baltic Sea region states will be involved in a nuclear race. Disagreements between Vilnius, Minsk and Moscow over the Russian and Belarusian nuclear plants near the vicinity of the Lithuanian is just one part of the picture.

In late June, Lithuanian parliament approved the concession agreement for the new Visaginas nuclear power plant. The old Ignalina plant shut down a few years ago in accordance with Litguania's accession agreement with the European Union. Japanese GE Hitachi Nuclear Energy is to become a strategic investor of the project, Lithuania (Visagino Atominė Elektrinė) would share 38%, Latvia (Latvenergo) 20% and Estonia (EestiEnergia) 22%. The final investment decisions are expected in 2015.

During the pre-voting debate in the parliament, Lithuanian prime-minister Andrius Kubilius urged to vote in favour of the Visaginas project, saying “those who vote against, vote for Belarusian and Russian nuclear stations”. Earlier, he publicly stated that Belarus and Kalingrad regional nuclear plants from the outset were envisaged as projects that would potentially stop the Visaginas plant project.

However, there is no unity among the Lithuanian political elite on this issue. On 16 July the Lithuanian Parliament voted for the referendum on a nuclear plant in Lithuania, thus highlighting disagreements between the opposition and the incumbent government.

Over the last two years previous years, Lithuanian officials on numerous occasions expressed their discontent with the planned Russian and Belarusian nuclear power plants in their backyard. Lithuanians are alarmed by the fact that both plants did not come through the procedure or an environmental impact assessment pursuant to the  Convention on Environmental Impact Assessment in a Transboundary Context (Espoo Convention).

Taking into account the slow procedures in the Espoo Convention and weak mechanisms to ensure state compliance with the recommendations made, Lithuanian authorities initiated a proposal in the EU organs to conduct the so called "stress tests" for nuclear reactors. Such tests are usually required for nuclear and radiation safety both for EU member states and neighbouring states when implementing their nuclear projects. The Commission submitted a report on "stress tests" to the President of the European Council in mid-2011 and assured that efforts would be made to engage Belarus and Russia in the process.

Although Russia and Belarus have not finalised appropriate procedures according to the Espoo Convention obligations, both have already started preparatory work on the new construction sites. Russia started construction of a nuclear station in Kaliningrad in 2010 and in spring 2012 work on concrete pouring into the foundation began. Belarusians got down to developing the foundation pit for their nuclear plant in late May.

Commissioning of the first Kaliningrad nuclear reactor is expected in 2016, followed by the Astravets first reactor in 2017 and Visaginas in 2020. The projected capacity of the latter is 3.4 thousand MW, Russia's and Belarus' power plants are somewhat less powerful at 2.4 thousand MW each. Estimated cost of both Russian and Belarusian nuclear projects is around $9bn, while Visaginas expenditures are projected to be as high as $5-7bn. The cost of the Lithuanian power plant is cheaper primarily because the Visaginas plant is designed to be placed in the area of the old plant, which removes the need to create extensive infrastructure from scratch.

(Prepared by the author)

Poland is somewhat lagging behind the neighbours. According to the strategy of the Polish Energy Group that was given a mandate to build two nuclear power plants, the first one is to be completed in 2025 and the second in 2029.

Currently Polish energy matrix almost exclusively (94%) consists of coal and Warsaw plans to diversify its energy mix. Out of hundred proposed locations three were pre-selected for the first nuclear power plant site, all near the Baltic coast. The final decision on the construction site is expected to be unveiled in 2014 together with the winner of the bid.

The Baltic Sea region is becoming intensively saturated with nuclear plants that would change its regional energy pattern in the coming years and decades and would require an intensification in the realm of nuclear cooperation between Baltic Sea region states in the near future.

Officials of the Baltic See region states involved in the nuclear race operate with contradictory scientific data to  support their intentions. On the one hand, Lithuanians are allegedly puzzled why Russians push a nuclear project in Kaliningrad which has enough to satisfy its energy demand without a nuclear plant.

Lithuanian prime-minister Kubilius lamented that Russian officials failed to explain this to him. Some even say that Russia's Baltic nuclear power plant risks becoming bankrupt as Polish energy giant PGE announced its decision to stop negotiating on power imports from Kaliningrad. Interestingly, PGE was considered a probable investor in the Visaginas NPP too, but later withdrew from the Lithuania project.

Contrary to the calculations of commercial detriment to the Baltic nuclear power plant without Lithuania's and Poland's interest in buying its electricity, Russians insist that the project will surely be profitable. According to the official "Energy strategy in Kaliningrad until 2015", the region may start suffering form an energy deficit by 2015. Rosatom also refers to the energy balance scenarios in the Baltic region by the year of 2020, prepared by the European Network of Transmission System Operators. According to them, energy deficit in the region is inevitable.

Belarus ruler Aliaksksandr Lukashenka in the manner so characteristic to him, explained these contradictory regional energy estimations by unfair competition. According to him, Russians in Kaliningrad and Belarusians in Astravets took the lead making in Lithuanians and Poles start "screaming" and coming up with various arguments in order to undermine the success of their neighbours.

For all that, in the regional nuclear power race Belarus seems to be the weakest link. Its Astravets power plant totally relies upon Russia's money and technology, in contrast to the other players that either aim to diversify their energy mix or lessen their energy dependency on their big resourceful neighbour.