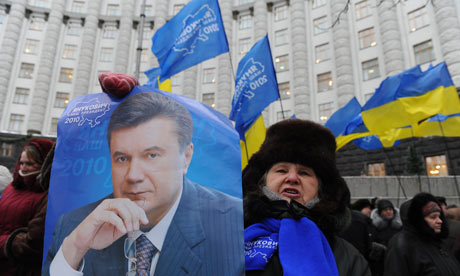 By Colin Graham
The future for Ukraine used to be orange in 2004 and now it is a lot more grey, or, according to a lot of commentators, white, blue and red – the colours of the Russian flag. Now that voters have almost certainly backed Viktor Yanukovich, the country's apparently pro-western stance that was supposed to have gripped the nation in 2004, with its hyped-up "orange revolution", doesn't seem to have occurred at all.

In 2004, Yanukovich was deemed to be history but now he is back, and with a vengeance, having won the presidential election against the charismatic but suspect figurehead, Yulia Tymoshenko.

Five years ago, we were told Ukraine was in thrall to a new dawn represented by Viktor Yushchenko, the leader who was facially disfigured by an alleged Russian-backed security service attempt to poison him. That didn't work, but Yushchenko hasn't done much to enhance his reputation since being in office. He has just been humiliatingly ejected after garnering just 5% of the vote, with his first term marked by a spate of corruption cases, political failures and a broken economy. No new dawn then.

A particularly tiresome event has occurred again and again ever since the Berlin wall came down. Leaders feted by the west as representing a radical fresh outlook for their post-communist, eastern European countries have generally turned out to be little different to their predecessors. In 2004, it was often conveniently forgotten that Yushchenko had at one stage been an integral part of the political establishment he was then seemingly trying to oust. The departing president at the time was the much-denounced Leonid Kuchma who had appointed Yushchenko as his prime minister five years before the "orange revolution".

In the background to all this, it is of course Russia that looms largest, and again a major western assumption is that the big bear is about to become some kind of malign beneficiary of the vote in Ukraine, rather than it being the people themselves who have just made an informed choice.

There looks to have been less interference from the US this time than happened in 2004, when a number of Washington-backed NGOs took an active part in events in Kyiv. I met some of them when in Warsaw. They had just returned from Ukraine as election observers and I saw just how objective they had been. One office was bedecked with dozens of orange banners, flags and scarves. But with a US president now in power who is less belligerent towards Russia than George Bush was, US interest in matters happening on Moscow's doorstep has been more subdued – not that we can assume Washington is exactly indifferent.

A good illustration of what is really at work in the west's dealings with the former communist bloc might be to look at Ukraine's neighbour, Belarus. Still ruled by hard man Alyaksandr Lukashenka, he has nonetheless fallen out with the likes of Vladimir Putin over energy and other issues and, as a result, has become less "Europe's last dictator" than a man the European Union, for one, can deal with. Brussels' policy is now one of encouraging "change through engagement" – a dubious position given that Lukashenko has shown very few signs of lessening his grip on power.

This is the man who said that his state would "wring the necks" of protesters during the run-up to the 2006 presidential election if they took to the streets. And it wasn't an idle threat. Back then, I recall, over the border in Poland, the same NGOs that had backed Yushchenko mobilised themselves to protest Lukashenka's outrages against democracy. It will be interesting to see how active they are during the next election in Minsk. Meanwhile, the Belarusian president is free to move around Europe after an EU travel ban was lifted as thanks for his refusal to back Russia's recognition of South Ossetia and Abkhazia's independence.

At this rate, Lukashenka could indeed become the new darling of the west in the former Soviet Union, replacing Georgia's somewhat tarnished Mikheil Saakashvili after his assault on South Ossetia in 2008. His record on upholding democratic rights has also come under fire within his own country and elsewhere.

And it was the Georgian president who got the ball rolling with these western-backed upheavals in the last decade. His "rose revolution" in 2003 was celebrated in Washington and other like-minded capitals as a huge victory for freedom, which it hasn't proved to be. The next year they were saying the same thing about events in Ukraine.
The Guardian