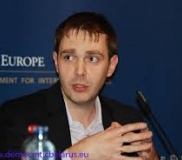 The official forecasts for socio-economic development in 2014 is as conservative as it has ever been: the projected GDP growth is only 3.3%. International organisations and independent forecasters are even less optimistic.

The economic authorities' plans for 2014 are also unusual. Less than two years before the next presidential election, the "pillars" of the Belarusian social contract – wages and employment – are being affected. It has been stated officially that the real wages in the budget sector will only grow in the case of layoffs.

According to official projections, employment levels will decrease in 2014 by about 3.4%, mostly through the "optimisation" of employees in state-owned enterprises and budgetary organisations. Against abackground of such major changes, there are plans to significantly raise utility costs for households – a very unpopular move.

Why are the authorities adopting such measures? In 2013, the current account deficit reached alarming levels and households turned into a net buyer of foreign currency. If it had not been for tight monetary and fiscal policies, which were launched under the Joint Action Plan of the Government and the National Bank, the situation on the currency market in late 2013 could have been much more complicated.

Will the implementation of the initiatives already announced by the economic authorities be sufficient to stabilise the situation in 2014? If yes, how stable will the balance they strike be? And what happened to the economy that was called the "Eastern European Tiger" just a couple of years ago by some official media outlets? 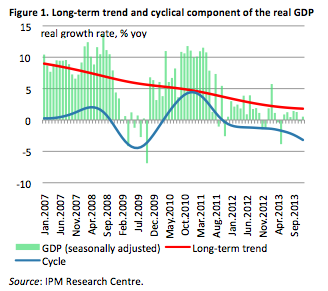 Even in the early 2000s, when the country was experiencing the effects of the Russian financial crisis and its own inconsistent policies, economic growth was higher (5.1% during 1999–2003). It seems that the Belarusian economy cannot grow at a rate consistent with the status of a country that is "catching up" in its development with more advanced economies.

According to the most recent estimates, in December 2013 they barely exceeded 1.8% a year and five years ago (in December 2008) they reached 6.5% a year (see Figure 1). Moreover, the cyclical component of real GDP has been declining for more than two years, i.e. the authorities' attempts to revitalise the economy are not producing any real effects.

One can come to the same conclusions through an analysis of aggregate demand. Growth in domestic demand, which was a stimulus for GDP growth over the last 10 years, is no longer having a positive effect for economic growth due to the negative contribution of net exports. Imbalances grow while the economy does not.

The accumulation of imbalances provoked by "bad policies" (enhancing of growth in domestic demand through directed loans, quasi-fiscal budget operations and income policy) was the main cause of the currency crises in 2009 and 2011. Negative external shocks played an additional role both in 2007–2009 and in 2010.

Once again, Belarus is facing a series of negative external shocks. In the first half of the 2013, a decline in exports occurred as a result of 2012's high levels of re-exported Russian petroleum products.

In the second half of 2013 exports fell because of a sharp decrease in exports of potash fertilisers (due to a conflict with Uralkali, a partner in the Belarusian Potash Company) and petroleum products (Russia cut its crude oil supplies to Belarus as a result of the "potash conflict").

Finally, from 2013 to the present moment, Belarusian exports (especially exports of investment goods) suffered from stagnation/recession in the Russian economy.

External shocks, which adversely affect its exports, were accompanied by an increase in imports under the influence of a rather rapid increase in domestic demand (both in consumption and investment). As a result, the current account deficit rapidly increased during the year and exceeded 10% of GDP in 2013, which is 2 percentage points more than on the eve of the 2009 crisis (see Figure 2). 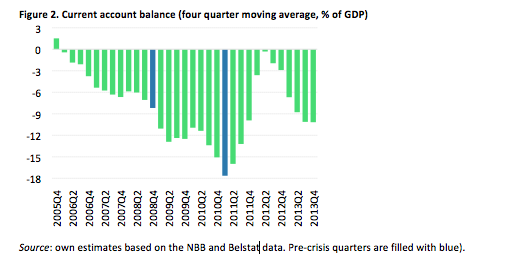 A loss of confidence in the national currency supplemented an increase in external imbalances. Again, the situation became even worse in Belarus when compared to previous crisis episodes: in the second half of 2013 very high interest rates scarcely helped to contain the outflow of Belarusian rouble deposits from the banking system, although in the beginning of 2014 the situation saw some slight improvement.

The story is as follows: the economy of Belarus entered 2014 with a high current account deficit, unstable situation in the currency market and sub-optimal monetary policy – and all this against a backdrop of an unfavourable position in external markets, especially in Russia. It seems that there are many reasons to regard the Belarusian rouble as overvalued and growth in domestic demand as too high to maintain macroeconomic stability.

From the perspective of macroeconomic stability (if we do not take into account changes in any external conditions), the possible scenarios for 2014 are tied to the country's exchange rate policy and macroeconomic (monetary and fiscal) policy.

A return to a policy of credit or fiscal expansion would ruin rather quickly the current fragile stability, there are two options left: (i) a strict macroeconomic policy with a crawling band/peg or (ii) a stringent macroeconomic policy with a floating currency and inflation targeting as a new nominal anchor. From the perspective of external imbalances, the efficact of the first scenario depends on how far the economic authorities will go down the path of reducing domestic demand.

The efficacy of the second scenario depends on how successfully the transition to a flexible exchange rate regime will be supported by monetary and fiscal policy measures. Both scenarios imply a curtailment of imports and some stimulus for exports, but if there is a transition to a free-floating exchange rate the effects will be considerably stronger and faster. Both scenarios mean that the economy of Belarus will endure recession or, at least, it will not grow by the 3.3% which the official forecast envisaged.

There is one significant difference between the current situation and that of 2011. Even if the Belarusian rouble is adjusted in real terms by, let us say, 20%, it will result, according to our estimates, in about a 4% of growth in exports, which are not related to crude oil, petrol products or potash fertilisers. During a recession in Russia, even this potential effect appears to be highly debatable.

However, since a fall in exchange rates will negatively affect domestic demand (this is eloquently demonstrated by Belarus' experience in 2009 and 2011), a growth in exports will be insufficient to ensure any growth in GDP.

Will it be sustainable?

Thus, to maintain macroeconomic stability, it is desirable to combine the transition to a free floating exchange rate, backed up with a strict monetary and fiscal policy. However, even if this were to occur several important questions remain. First, a tight monetary policy implies a serious reduction in support for state-owned enterprises.

It is also necessary to first improve the efficiency and flexibility of Belarus' labour and capital markets. But making the decision to start structural reforms is very difficult for the Belarusian authorities. The last currency crisis took place almost three years ago and they still have not made the "new (old) decision" in favour of reforming state-owned enterprises.

Without this choice, every possible scenario involves the risk of a return to supporting state-owned enterprises and the consequent risk of preserving of the current "model" for the economy, one which is prone to regular crisis and stagnation.

The beginning of structural reforms can improve Belarus' position in any negotiations with the IMF and other international financial institutions. Regardless, the authorities will have to launch reforms without any financial support. It remains to be seen whether the economic authorities will be able to introduce a policy that the economy can sustain.