Who Invests In Belarus? On 17 April 2013 Standard and Poor's upgraded its outlook on Belarus sovereign rating from stable to positive.  According to the agency, strengthening economic stability was brought  on by tightened monetary and fiscal policies.

The beneficial change means more than a pleasant evaluation of the country’s performance, but also a signal to foreign investors, which Belarus needs now more than ever. While the Middle East countries continue to speak highly of the country’s investment attractiveness, the less friendly West invests in Belarus much more.

The facts suggest that Belarus' politics plays a less significant role for foreign investments’ inflow than one could imagine. Even more, statistics shows increase of European investments into Belarus against the background of deterioration of Belarus-EU political relations.

Map of Foreign Investments in Belarus 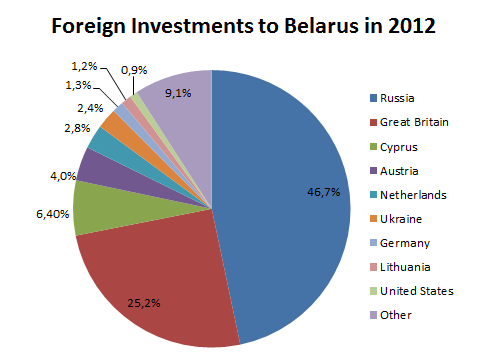 The origin of foreign investments coming to Belarus remains quite stable. Traditionally, the largest amounts come from Russia and the European Union countries. Since 2007 Russia, Great Britain and Cyprus have never left the Top-5 countries investing in Belarus, regardless of whatever changes in Belarus’ external policy. Austria, Germany, Netherlands, Switzerland, Lithuania, Ukraine, the United States and China also head the list of active contributors to Belarusian economy.

At the same time, the widely declared plans of Belarus’ government to attract investments from the East, namely, from the Middle East remain far from full implementation.

Even with the rare existing investment projects of the Eastern countries in Belarus considerable troubles occur. The most notorious ones include refusal of Oman investor from carrying out a major investment project in June 2012 – a couple of years after entering into an investment agreement with Belarus.

In 2010, the Oman investor obtained a 2.6 hectares’ land plot in the very centre of Minsk and a number of other preferences granted by the Belarusian President.

According to Minsk city authorities, the investor’s refusal from the project resulted from the 2011 economic crisis. At the same time, for example, Qatar investments until now appear to be working well and tend only to increase.

The situation with foreign investments from China remains unclear. Belarusian media devote much attention to Belarus-China economic cooperation  but in reality the country’s investments into Belarus still remain modest, although higher than those from the Middle East states. The major contributions came to Belarus from China as earmarked loans of Chinese banks for a implementation of projects involving the use of Chinese goods and workers.

The low responsiveness of foreign investments to political developments became obvious in 2011. Despite Belarus-EU relations hitting a new low after the 2010 presidential elections, the inflow of European investments into Belarus in 2011 exceeds the level of 2010 and 2009. Belarusian Internet resource Doingbusiness.by provides the following chart of foreign direct investments inflows to Belarus from the EU and the European Free Trade Association countries: 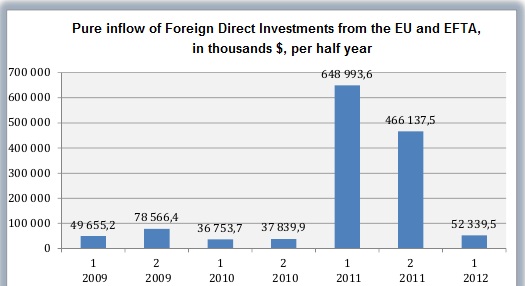 Importantly, Europeans themselves do not hide that economic interests prevail over political disagreements. Therefore, the dislike of the West of the Belarusian regime hardly reflects on FDI flows. Even Belarus Prime-Minister Mikhail Miasnikovich complains about the insufficient profitability of investments into Belarusian industry: the $31,5 bn invested into Belarusian industry have brought only $19,2 bn increase of value added during the last 7 years.

The United States, despite a firm stand on the political situation in Belarus, also  invest in Belarus. As of now, the most preferred destination of American investments in Belarus is the High-Technology Park. Three American companies included into The 2013 Global Outsourcing 100 rating - EPAM Systems, Intetics and Itransition – reside in the High-Technology Park. Some of them were founded by ethnic Belarusians.

Considering investments from Russia, politics does influence them, although with certain peculiarities. Using financial and fuel dependence of Belarus from its big neighbour, Russian businesses can secure their investment interests in Belarus. It is no secret that the Russia-Belarus agreement on the sale of Beltransgaz’ shares to Russian Gazprom appeared on the same day as the treaty on lower Russian gas prices for Belarus. So, the irony of the Russia-Belarus relations was that the largest Russian investment into Belarus made the result of gas disputes between the countries.

A range of reasons for which these, but not the others, European countries invest in Belarus is wide. Together with strength of such countries’ national economies in some cases and geographical closeness to Belarus in the others, go tax regulations.

Belarus concluded double taxation treaties with 63 countries, including,  those which invest in it. Predictably, the treaties with the actively contributing in Belarus countries provide their residents with the best investment opportunities. The low tax on dividends – for which the statutory rate in Belarus is 15% – plays an important role.

Great Britain firmly ranks second among states of origin of investments coming to Belarus. A great deal of funds from this country concentrates in Belarusian free economic zones and High-Technology Park. Doing business in these areas ensures considerable taxation and other privileges for its residents, but British investors are in a favourable position a priori. According to the Great Britain-Belarus double taxation treaty British companies and natural persons pay no taxes on dividends at all.

Provisions of the double taxation treaty with Cyprus, Netherlands, Germany and Austria are less attractive. Still, under certain conditions they provide for the tax rate of only 5% on dividends. Thanks to this rule, investing from these countries becomes more profitable than from almost all the others.

The Cyprus' extremely beneficial national taxes coupled with benefits from the double taxation treaty, it is easy to understand why this small country headed the list of countries investing into Belarus during all these years up to recently. Moreover, many businesses from Belarus and other former Soviet Union countries use entities incorporated in Cyprus to do business back at home.

So, European investors are still far more active in Belarus than their Asian competitors despite high politics. Whether the tendency will last remains still unclear because the Eastern countries are expanding their capital over the world. In Belarus their state will not be essentially worse than that of the Europeans - at least from the point of view of taxation.

Belarus simply needs investments in big volumes and does not care a lot about their sources. While international political relations can influence foreign investors’ intentions, their first priority is profits. But as of now, Belarus’ financial attractiveness is still not high, both because of low profitability and the lack of stability of Belarusian laws and economy.

Belarus still has many lessons to learn how to attract foreign investors.