Why Do Belarusians Commit Suicide?

On 10 September, the world celebrated suicide prevention day. Belarus ranks sixth in the world with regard to the number of total suicides that occur annually.

Last year, about two thousand Belarusians committed suicide -  higher than the number of road accident victims. Belarusian men, like elsewhere in the world, tend to commit suicide more than women, though the large number of suicides in rural areas sets Belarus apart from other countries. Studies indicate that increases in alcohol consumption in Belarus correlates with an increase in the number of suicides.

The overall social withdrawal and tendency towards depression that Belarusians face, rather than poverty, constitute the main reasons for the current situation. Although the Ministry of Health Care has taken certain steps to prevent suicides, Belarusians should first and foremost decrease their own alcohol consumption in order to reach this goal.

The Grand Duchy of Suicide

Every year, about a million people all over the world commit suicide. Scientists and scholars consider those countries that have a rate of 20 suicides per 100 thousand people to be states with a high level of social behaviour. Since it gained its independence, Belarus has never dropped down to this level.

World statistics on suicides are not regularly updated, which sometimes makes it impossible to properly assess and highlight Belarus’ place with regard to the number of suicides that take place in the country annually.

In 2012, 1,949 Belarusians committed suicide. In the 1990s, the number was even larger – about 3,500 Belarusians killed themselves every year. Before the economic crisis and default happened in Russia in 1998, the number of suicides decreased while after the default it once again began to grow. 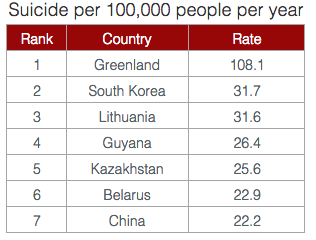 Belarus often parallels Lithuania in such ratings - a country with which it shares a long common history.

Although the countries picked different paths of development, they remained similar to one another in the number of suicides committed in each. This is perhaps due to the fact that both countries are agriculture-based as a considerable number of people could not adapt to the capitalist reforms and fell into despair.

Lithuanians often tie the large number of suicides to the overall depression of the nation, which could also be said about Belarusians as well. The problem lies also in the fact that many people in both Lithuania and Belarus lost any possibility of earning a living in the countryside and at the same time were not able to adapt to working in the private sector with industry or services.

The number of suicides in Belarus coincides with the same tendencies in many other post-Soviet countries that built their independence on the foundations of their great Soviet heritage -- one that left them with an empty state budget and destroyed connections and trust between people.

In order to realise the seriousness of the number of 1,949 suicides, it may be instructive to compare it with the number of road accidents victims – 1,312 people last year, or the victims of alcohol poisoning –  which was 1,918.

A high level of alcohol consumption often leads to higher levels of suicide. Most of the people who killed themselves and who attempted suicide abused alcohol for at least a year before they decided to take their lives.

Yury Razvodovsky, a Belarusian scholar from Hrodna State Medical University conducted research and produced a report that shows a significant association between alcohol consumption and suicide rates. The study suggests that an increase in alcohol consumption per capita by 1 litre would result in an 8.8% increase of the suicides rate.

The scholar observed that Gorbachev’s anti-alcohol campaign reduced the consumption of alcohol from 13.3 to 6.7 litres between 1984 and 1986 which in turn led to a decrease in the suicide rate 15.4 to 7.0 per 100,000 people. Therefore the author of the report concluded that restrictive alcohol policy would be an effective measure to prevent suicides.

Rural residents tend to drink more. Although only a quarter of Belarusians live in the countryside, the number of suicides there remains 2.5 higher bigger than in the cities. Alcohol remains remarkably cheap and affordable in Belarus, which makes the problem even worse.

The average suicide victim from Belarus is a man of active working age between 45-54 from the countryside. He has a lower than the nationwide average level of education, meaning that more often than not he did not have even complete secondary education. As for women, many of the victims were retirees on pension. Still, it is working age people that have committed a majority of the suicides. Hanging or jumping remain the most frequent ways to commit suicide for Belarusians, accounting for nearly 80% of all suicides.

The low level of religiousness in Belarus also affects the numbers. According to the research of Gallup, Belarus remains one of the most atheistic countries worldwide. Only 27 percent of respondents said that religion played an important part in their everyday life. It should also be noted that none of the other world leaders in suicide are particularly religious countries.

What Does the State Do?

Although the Ministry of Health Care elaborated a complex plan on suicide prevention, the root of the problem lies in the closed mentality of Belarusians. According to TUT.by, 90% of people who killed themselves never tried to get psychiatric help from specialists. Some people are afraid of asking for counseling or support as they remain afraid of being put on a record as having received psychiatric treatment.

Although the number of suicides is decreasing, Albina Samusenka of the Mahileu Centre for Hygiene, Epidemiology and Public Health says that “the situation has not improved as the number of para-suicides is growing. The people who are attempting suicide are still there.”

Suicides are not the kind of problem that a presidential decree can solve. To cut down the number of suicides committed annually, Belarusians should lessen their alcohol consumption and conduct real economic reforms, especially privatisation of land in the rural areas.

Changing the Belarusians mentality to make their minds more open remains the key task. By restricting the freedom of association and other rights of its citizens, the Belarusian authorities have done much in the way of depriving Belarusians of the opportunity to articulate their interests.

A robust policy to reduce alcohol consumption coupled with giving more freedom to religious organisations and NGOs would help decrease the suicide rate in Belarus. Unfortunately, many authoritarian regimes view strengthening civil society as a threat to their existence. Belarus is not an exception here.