Why Eastern Europe's Future Was not Orange 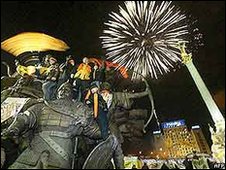 The colour orange was the most memorable symbol of the Orange Revolution, the chain of events that led to regime change in Ukraine at the end of 2004. That colour put Ukraine on the map for millions of people across the world.

In the aftermath of the Orange Revolution, there were many in the West and the countries of the former Soviet Union who predicted a domino-type wave of revolutions, that would bring democracy and liberalisation and reverse the authoritarianism that was widespread and consolidated in the region.

Amusing lists began to appear on the internet: Russia would have a "vodka revolution"; Belarus, a "potato revolution"; Kazakhstan, an "oil revolution", etc.

National stereotypes aside, many suggested that Alyaksandr Lukashenka, the strongman leader of Belarus (who has now been in power for 16 years) could not hold out much longer.

Others thought that Armenia and Azerbaijan would follow the pattern set by Georgia's Rose Revolution, and throw off rulers whose political legitimacy had hardly been established by free and fair elections.

Predictions that the particularly repressive regime in Uzbekistan would end abounded.

These predictions were wrong.

They were based on the idea that democratisation was an inevitability; they took little account of the fragility of the newest democracies.

More seriously, they ignored Russia's determination to restore its influence in the "near abroad" using, among other factors, a pre-emptive approach to stop pro-Western leaders taking power.

It was also reflected in what human rights groups say were crackdowns on media freedom, and particularly unofficial youth and non-governmental groups.

In Belarus, nearly four years later, the opposition is fractured; the president's popularity, if polls are to be trusted, remains high. There was no regime change, let alone revolution.

Even in Georgia, whose Rose Revolution started the upheavals, incumbent governments have moved hard to silence critical voices in the electronic media.

The Central Asian republic of Kyrgyzstan was the first domino to fall after Ukraine.

Three factors sparked off what became known as the "Tulip Revolution": allegedly fraudulent elections; resentment at a president (and ruling family) widely considered corrupt; and grinding poverty and unemployment among the young.

Unlike Georgia and Ukraine, there was no organised opposition movement, no figurehead, and the unrest quickly became chaotic and at times, very violent.

President Askar Akayev fled the country, and regime change took place. But these events are now most often seen as violent demonstrations against poverty. The country remains prone to serious political instability.

In September 2005, during an unauthorised demonstration by opposition and unofficial youth groups (marking the disappearance of a popular opposition leader back in 1999), militia snatched white-red-white national flags from participants as their display was illegal.

One of the demonstrators ripped off his blue denim shirt and, holding it aloft, proclaimed that was to be the symbol of protest.

The demonstrations that followed the March 2006 presidential election in Belarus were quickly branded "the jeans revolution" by foreign media.

While initially large, they, like blue jeans, faded and were quickly cleared by the authorities.

Nearly four years later, the opposition in that particular country is fractured; the president's popularity, if polls are to be trusted, remains high. There was no regime change, let alone revolution.

But what about Russia?

One Ukrainian commentator memorably referred to the Orange Revolution as "Moscow's 9/11".

Yet the same people who were involved with Russia's policy in Ukraine at that time - in particular Gleb Pavlovskiy, the spin doctor once banned from Ukraine on national security grounds - are now still close to the government, even key shapers of the media scene.

Their approach differs now, though.

There will be no repetition of Russia's visible, partisan involvement in the 2004 Ukrainian presidential election.

Indeed, Mr Pavlovskiy has since concluded that Russia must pursue its aims through the media, institutions, social networks and societies - not by siding blatantly with its favoured candidates in other states' elections.

And how does the West look in all this? Is there actually a failure by the West, first and foremost the EU, to seize the opportunities presented by the Orange Revolution? After all, Poland pushed hard for the EU to provide Ukraine with some sort of viable roadmap towards membership.

Yet the EU now appears to have finally discounted whatever membership aspirations Ukrainians (and, for that matter, Georgians or Moldovans) felt at the end of 2004.

Plans to sign a new Association Agreement have been repeatedly delayed, and Ukraine is now grouped together with countries like Belarus and Armenia, as part of the EU's Eastern Partnership, whose goals are, in the main, modest.

Nonetheless, the EU highlights co-operation in business and trade, which have grown remarkably. The EU is Ukraine's largest trading partner, and is by far the largest investor in Ukraine.

And, for many people in the West, Ukraine is a much closer, and more accessible country, owing to factors like visa-free travel, Eurovision and, of course in the future, Euro 2012.
BBC