Each time the Belarusian economy hits a bump experts start to predict a forthcoming full-scale privatisation in Belarus. The logic is simple: when the level of subsidies from Russia diminishes and foreign lenders refuse to extend new loans, then the only remaining option is to privatise state enterprises. But it is already 2013 and the properly remains largely in state hands. A recent study of implementation of the 2011–2013 Belarus State Property Privatisation Plan shows that each time Belarusian authorities make noise around privatisation they never mean a full-scale privatisation. They usually put on sale low-profit enterprises with ageing workforce and expect that investors will remain in the same sector without reducing employment.  Belarusian researchers Tatyana Chyzhova, Dzmitry Isayonak and Lidzia Mikheeva analysed data, which Property Committee published in the wake of privatisation auctions, auction announcements and auction results and came to interesting conclusions.

Belarusian Minister for Education Siarhei Maskevich on 28 January 2013 expressed his hope that students will convert the Belarusian science "into the main factor of socio-economic and mental development of the country". But does the government really foster the progress of students' education in Belarus? The lack of academic freedoms, mandatory and old-fashioned study plans have become the main defects of the Belarusian higher education. While government makes certain steps to approach these issues, the progress is rather slow.

It is okay to be hopeful for change in Belarus – not because the opposition is strong, but because the regime is looking weak. Heads in Brussels and elsewhere are sore with scratching. Over the past 21 years, haphazard combinations of carrots, sticks, tricks and fireworks have all failed. Alyaksandr Lukashenka remains in power in Belarus. That is a dark disgrace for Europe. It is worth remembering that out of nine opposition candidates in the 2010 election, seven were arrested. Some were tortured and Mikola Statkevich is still in prison. Also behind bars are Paval Seviarynets and Vasil Parfiankou, Zmitser Dashkevich and Eduard Lobau. A particular scandal is the jailing of Ales Bialiatski, a human-rights campaigner who was prosecuted thanks to information supplied (apparently in error) by the Lithuanian and Polish authorities. The release from prison in April of Andrei Sannikau, another opposition leader, to asylum in Britain, cheered his friends. But exile acts as a safety valve for the regime. Dozens of its most dedicated foes are fulminating abroad, not campaigning at home. Exiled oppositions have a generally poor track record in toppling dictatorships. Worse, the Belarus cause is divided between supporters of the Belarus National Council (a vestigial but symbolically important relic of the short-lived state of 1918) and other groupings.

A stable public support for Alyaksandr Lukashenka and a peak of “economic crisis feeling” of Belarusian citizens are the most important findings of the latest public opinion poll provided by IISEPS (from December 2012).

Two years after his re-election Mr. Lukashenka has lost 20 points or even more (comparing IISEPS long-term polling data) and his public support has been stable at a level of 30%. This trend essentially makes him a minority leader. Such “President`s Peak” has been predicted by several previous BISS's Polling Memos. Yet, as the major polling prognosis for 2013, BISS suggests there is no sign Mr. Lukashenka would be in relevant danger to lose his secured one-third this year.
Despite Mr. Lukashenka`s 2012 communication effort and some measures (especially salary growth), the number of those who thought that the Belarusian economy is in crisis has raised to the highest ever. The 88% in December 2012 represents 10 points more than half a year ago (in June 2012 - 77%) and last month was even higher than at the end of the 2011 crisis year (81.5% in December 2011). However, as a contrast to this strong “feeling of crisis” of the population, the number of those who said Belarus was on the wrong track was “only” 46% in December 2012. This is 10 points less than a year ago (in December 2011 it was 56%). Moreover, there are similar numbers in many European countries or in the U.S.

In November, civil society representatives convened in Minsk to vote on the Concept of the National Platform of the Eastern Partnership Civil Society Forum (EAP CSF). The adopted version of the Concept favours an expansive interpretation of the civil society mission and was criticised by some groups as pushing civil society organisations on the road of political conflict with the Belarusian authorities.  Unnecessary politicisation of civil society activities was mentioned as the primary reason for the refusal to sign the Concept by the Belarusian Association of Journalists, human rights centre “Viasna”, Office for Democratic Belarus, Belarus Helsinki Committee, Belarusian Institute of Strategic Studies, and others. How harmful politicisation harmful for the development of the Belarusian public sphere?

Rodger Potocki, Senior Director for Europe at the National Endowment for Democracy, offers a comprehensive assessment of the successes and problems of the Western policy response to the December 2010 post-election crackdown in Belarus.

The second anniversary of the December 19th postelection crackdown in Belarus offers an opportunity to weigh the costs of “Bloody Sunday” and assess the West’s response. In 24 months, Belarus has gone from a potential European Union (EU) partner to an international pariah, from among the more prosperous to one of the poorest performing post-Soviet economies. The human toll has been harsh. After protests against a flawed presidential election, Alyaksandr Lukashenka’s regime beat, imprisoned and tortured more than 700 of its citizens; raided dozens of civil society organizations; and forced scores of activists into exile. Related demonstrations in 2011 led to the repression of thousands more. The regime still holds more than a dozen political prisoners. The resulting economic crash has made millions poorer and spurred significant brain drain and labor migration. The population is passive and seemingly resigned to more of the same. On 26 November the only independent television channel Belsat broadcasting for Belarusians cut the broadcast and sent a significant number of its employees on leave. Earlier this year Belsat broadcasted for 17 hours a day.  Today it is only six and a half hours. An independent TV channel that broadcasts from Poland to Belarus failed to raise necessary funds to continue its work in the old format. After the economic crisis Western donors are financing Belarusian independent television less and less. Five years ago when the channel was founded, independent Belarusian community had a very sceptical attitude towards Belsat. In 2008 cultural analyst Maxim Zhbankou, who hosts a TV-program on Belsat, called the channel a propagandistic, provincial and superficial. However, after a significant improvement in the quality of broadcasts, the criticism significantly decreased, and Belsat became one of the most popular independent media. 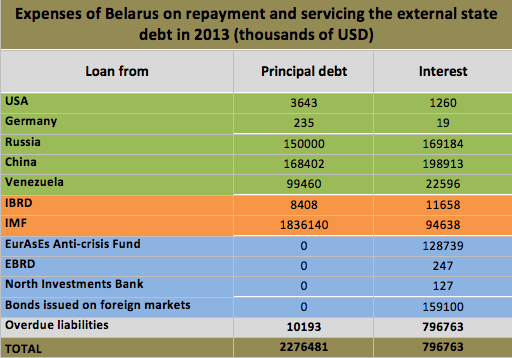 Today a Belarusian delegation which included the Minister of Finance of Belarus Andrey Kharkavets and the Minister of Economy Mikalai Snapkou arrives for a three-day visit to Singapore and Hong Kong. They plan to arrange a road show to market the new Eurobonds issue of Belarus. They need to issue more bonds to service the growing national debt. In 2013-2014 the amounts that Belarus will have to serve its external debt is likely to increase significantly. The country has borrowed this primarily to support of foreign balance figures. Now it steady keeps monthly deficit after the scandal with Russia on the solvents import. The need to repay the mounting external government debt puts the authorities in a rather difficult situation.

The International Monetary Fund recommends Belarus to restrain the crediting of the state programs, as stated the head of the third mission of the International Monetary Fund on the post-program David Hoffman. According to the head of the mission, the IMF expects from Belarus a plan for constructive reforms , which would allow to start negotiations on a new stand-by program. The IMF also recommends the National Bank to raise the refinancing rate. Hardening the economic policy started by the country’s authorities in the end of 2011 allowed to facilitated the reduction of the inflation and stabilization of the foreign currency market during the first half of 2012, as the representatives of the IMF noted.